Orlando, FL also known as “The Beautiful City” is the 79th largest city in the United States and is located in central part of Florida. Central Florida is considered semi-tropical as the average annual high temperature is 83 F and the average annual low temperature is 63 F with summers being extremely hot and humid, rarely missing an afternoon thunderstorm and winters being mild with sunny, comfortable temperatures. Being centrally located, Orlando is 75 miles northeast of Tampa, St. Petersburg, and Clearwater and 50 miles west of Cape Canaveral, the Kennedy Space Center, and Cocoa Beach.

View Larger Map
Orlando, FL is best known for the Walt Disney World resort, it is also home to Universal Studios and Sea World. These resorts alone bring in thousands of visitors annually but, is also home to The Orange County Convention Center; the second largest convention complex in the United States which is critical to the economy in this region. Orlando is constantly in competing with Chicago and Las Vegas for hosting the most attendees. 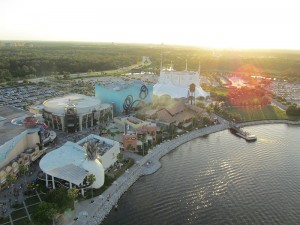 Most families visit Orlando during the summer months, battling the heat and humidity to visit the amusement parks. The Walt Disney Resort is made up of several different parks; Magic Kingdom the home of Cinderella’s Castle, Epcot that focuses on different countries and their cultures, Disney’s Hollywood Studio which allows visitors the opportunity to see how stunts are done in the movies, Disney’s Animal Kingdom is an animal theme park, Typhoon Lagoon and Blizzard Beach are the Disney water parks, and Downtown Disney is full of amazing shopping, a variety of shopping, and entertainment. Another large amusement park is Universal Studios and Islands of Adventure which is similar to Disney’s Magic Kingdom with numerous rides, entertainment, restaurants, and children’s characters. Wet ‘n Wild is another famous park and finally, SeaWorld Orlando which also has more than one park, Aquatica and Discovery Cove. SeaWorld features marine animals, rides, a water park, and zoological displays. Adults and retirees that choose Orlando to spend their vacation tend to visit during the off season when there are fewer people and the temperatures are more pleasant. Adults usually like to visit Orlando for the abundance of golf courses and shopping.

Regardless if a person is just visiting or relocating to Orlando, there is plenty of entertainment to enjoy. Among the amusement parks, golf courses and shopping, there are great beaches nearby, multiple lakes for boating, tubing, fishing, etc. Orlando is the home of the Orlando Magic and now has a football team at UCF to enjoy taking in a game. Downtown not only offers an excellent nightlife for any group, it attracts great live music. Many people are attracted to Orlando because there is virtually no real winter here.

Visiting or relocating to Orlando there are several ways to travel, flying in to The Orlando International Airport is the primary airport for Orlando, The Sanford International Airport is located in a nearby suburb and serves as a secondary airport, and The Orlando Executive Airport, located near downtown Orlando serves executive jets, general small-aircraft aviation, and flight schools. Rail service is offered through Amtrak on CSX A line; the only railroad to service the Orlando area, and Greyhound Lines offers bus services across the country. Finally, driving there are several options for driving into Orlando; Interstate 4 starts north in Tampa, FL travelling through Orlando and ends in Daytona Beach, FL. There are seven toll highways available for driving into Orlando, East-West Expressway (Toll 408), Central Florida Greenway (Toll 417), Beachline Expressway (Toll 528), Daniel Webster Western Beltway (Toll 429), John Land Apopka Expressway (Toll 414), and Florida’s Turnpike (Toll 91). Photo Source: ILA-boy

Your Florida and Orlando Expert

I love living, working and playing in the area and if you love it just as much, give us a call to find your perfect dream home in the Orlando real estate market. I help buyers and sellers in Winter Garden, Clermont,  Minneola and all over the Orlando area. Where know where to live in Orlando!